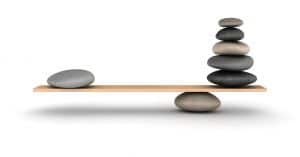 As a species, we humans are notoriously poor a conceptualizing risks. Yes, historically, we have developed some pretty good mechanisms to evade predatory animals, but the chances of being pursued around the modern workplace by an actual sabre toothed tiger are extremely slim these days. The biggest physical risks we face in our modern lives are from our fellow humans, our built environment and our various forms of transport, few of which really factored in our evolutionary past until the past couple of hundred years.

Regardless of our familiarity with a particular potential risk, we also have a tendency to assume a linear, balanced symmetrical profile for risks, so we assume that, for instance, a particular task we are scheduling has as much chance of finishing early as late and, that the degree of variability will be evenly distributed. This assumption is, however, highly flawed, the great majority of risks in the business world are, in fact, asymmetrical in nature. They almost always have a bias either to greater or lesser than the perceived normal point.

What Are Asymmetrical Risks

Asymmetrical risks occur in situations where there is a likelihood that the outcome of the risk event will be either greater than or lesser than the norm, so something is more likely to occur or less likely to occur, not equally as likely or not.

So, for instance, if you were to predict that a particular task would take a week to complete, the absolute minimum time for that task to be completed will be no greater than one week before it is due to complete, since it has a predicted duration of one week, but the potential for the task to be late is almost infinite, since the time following its planned completion date stretches into weeks, months and years, though in reality the task is of course likely to be finished within a sensible duration.

Similarly, if a commodity is anticipated to cost $1,000 when an estimate is generated, the realistic minimum a project may pay for the commodity could be $0, assuming one were to be found in stock or donated, but the potential for it to cost substantially more than the budgeted $1,000 is again a realistic possibility.

This asymmetry of likelihood manifests its self most commonly in schedule and budget planning, where personnel are required to predict a plus and minus for task durations and likely costs for goods and services. It is here that a combination of our natural human difficulty in perceiving risks and our optimism that we can control, and even reduce risks begin to cause real problems for projects in what is known as optimism bias.

The Impact Of Optimism Bias on Asymmetrical Risk Planning

Our poorly developed ability to adequately comprehend and conceptualise risks leads to toward optimistic projections for things we believe we can control but, in reality are completely outside of our control.

For instance, when planning a project budget there is a tendency to assume that if you are buying in bulk you will get a discount on the items, when in reality it could be that other market forces drive the cost of the equipment up so far that even your discount will still result in a greater per unit cost. Similarly, there is a tendency to assume that labour rates will progress at a constant pace, though market forces could drive them higher much faster. Also, the time taken to complete a task may be accurately estimated and that estimate applied to the overall cost calculation, but, the chances of the task taking longer than this estimate are far greater than the task being completed earlier.

Yet, for all of the above, projects continue to be under estimated in terms of cost of labour, cost of materials and duration of tasks, along, of course with many other variables being inaccurately estimated.

[bctt tweet=”projects continue to be under estimated in terms of cost of labour, materials and task duration”]

None, or at least little of these errors are made maliciously, those producing the numbers usually genuinely believe their own numbers, but the results are the same.

Next on the list of asymmetrical errors is what happens to project estimates when they are submitted to management for final approval. In these management reviews there is a seemingly permanent tendency to try to cut costs and reduce time allowed for work. It is not uncommon, for instance, for a management review to “recommend” a 10% cut across the board before a project ill be sanctioned.

In these cases, even a project which has been estimated with a sensible allowance for asymmetrical risks, will be reduced to one that is almost guaranteed to have an overrun since much of the risk allowance will be taken away in the 10% cut.

What This Means For Virtual Teams

So, what does all of this talk of asymmetrical risks have to do with virtual teams?

Virtual teams are used for one of three reasons; to access labour at lower unit rates, to access hard to find skills or to access a needed volume of labour. As such, the pressure on a project to cut costs can lead to more work being sent to lower cost centres, or those centres being pressured to increase their productivity, (it should be noted that the lower cost centres frequently have a lower productivity per unit of labour due to lower levels of automation and unfamiliarity with standards and practices in the host or destination location)

As a consequence of this, the budgets for both the home or ‘hub’ office personnel and those in the virtual team ‘spoke’ offices, both in terms of available time and labour, will be placed under extreme pressure.  Travel and communication technology budgets will be tightened and interface personnel will be reduced to a minimum. These reductions and cuts result in communication breakdowns and lack of relationship building between virtual team personnel, all of which puts the success of the virtual team and with it the success of the overall project under intense pressure.

Clearly the above situation is not healthy. Projects are regularly under estimated and under funded as a result of many factors, but our inability to conceptualise and manage asymmetrical risks is definitely one of the big contributors. As a minimum we need to do a better job of educating those responsible for generating the input to estimates, those undertaking the estimates and those presenting the estimates to the personnel responsible for final sign off.

We also need those signing off on projects to better understand the impact of arbitrary cuts and of the risks they then place on the project. Project estimates are usually finely balanced and delicate things that can rarely be forced into shorter time frames or tighter costs without serious and often unexpected consequences.

We owe it to ourselves to do a better job of planning, approving and executing our projects, virtual teams play an ever increasing rome in this but they need to be given the support and respect they need to deliver.

Do you have experiences budget restrictions or asymmetric risks have impacted your virtual teams you would like to share? If so, we would love to hear from you.

Ulfire specialises in supporting organisations plan, establish and run high performing virtual teams. We combine extensive practical experience from decades of involvement in virtual teams with current real world academic research into the way members of virtual teams collaborate. Please contact us to discuss ways we can help your business, or sign up using the form below to receive our regular newsletter.