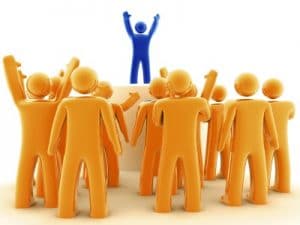 From time to time, I come across a senior leader, manager or owner in a organisation who will happily tell me what a great and effective communicator they are.  That, when they speak, everyone listens, and how they continually receive praise from their staff, telling them how well they get their messages out.

Often these leaders are correct, they are indeed extremely effective in getting out their message, but also, sadly, a number are labouring under a myth of leadership.

This leadership communication myth is hardy a surprise however, a combination of the power vested in the leaders of organisations and the attribution of the success of many businesses to the quality of the leader, builds an aura around these leaders, an aura in which their views and ideas are actively sought out in the belief that their ‘words of wisdom’ can be used to help others build successful organisations.

To see examples of the culture that exists around this leadership communication myth, one only needs to look the number of followers many business leaders have on twitter, the numbers of readers subscribing to feeds on the LinkedIn influencers functionality from business leaders and the attendances at keynote presentations from these same leaders.

I am not necessarily suggesting that some, or even on occasion all of what many of these leaders have to say is bad, I am simply pointing out how we have built a ‘culture of belief’ that what they say is of such high value when compared to the words of others.

There are a number of factors which can get in the way of a leader’s ability to communicate in the most effective way. Chief among these are the need to respect organisational confidentiality, acting in the best interests of the shareholders, attempting to balance a message to maintain a middle ground and not understanding the needs of those being communicated too.

Equally, there are many situations where a leader may not really understand the issues due to their support personnel not giving them the entire story, this happens either to protect themselves or to avoid having to give bad news to authority, plus, of course there are those people in leadership positions who are not good natural communicators or who simply don’t understand the need for and effectiveness of good, efficient and balanced communication.

Additionally, where the success of an organisation on a particular initiative is attributed to the business leader, but, where in reality the success was as a result of good overall teamwork, luck or the efforts of specific individuals, the leader may not fully understand how the success was achieved and, as such will find it difficult to explain how the success happened.

There are a number of signs that a leader is failing to communicate in a way their personnel need, by looking out for those identified below and others, the attentive leader can hopefully avoid some pitfalls;

The best way to avoid falling too heavily into the leadership communication myth is to remain vigilant to your circumstances, seek genuine, broad ranging input, ideas and feedback from your contacts and as much as anything, avoid succumbing to the need to fill a silence with either spoken or written word when simply saying nothing can be more appropriate.

With media, employees and other stakeholders actively pursuing senior business leaders for sound bites and words of wisdom it can become too tempting to simply give in and say anything, and the anything can get you into lots of trouble.

Ulfire specialises in supporting organisations plan, establish and run high performing virtual teams. We combine extensive practical experience from decades of involvement in virtual teams with current real world academic research into the way members of virtual teams collaborate. Please contact us to discuss ways we can assist your business or subscribe using the pop up box to receive future articles.