Team of teams – what virtual teams can learn from the book 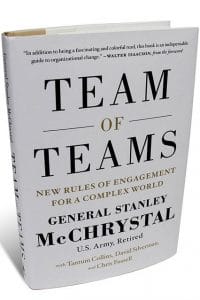 It is quite unusual for me to come across a business book that has a strong relevance to the leadership and operation of virtual teams, but Team of teams: new rules of engagement for a complex world, written by retired US General Stanley McChrystal with co-authors Tantum Collins, David Silverman and Chris Fussell is one of the recent good ones.

The central focus of the book is the description of how McChrystal led the transformation of the Joint Special Operations Taskforce in Iran in 2003. He took it from one of traditional command and control, where junior officers are required to look to their senior leadership for commands and approval to undertake any decisive action, to one where the entire team is brought together to openly collaborate around the sharing of information and intelligence. This change empowered them to act on their collective insights without continual reference to their senior leadership for approval.

The book takes a well structured and researched journey through conventional management theory. It provides substantial examples and descriptions before the authors explain why many of these theories are no longer applicable in the modern world, both military and civilian, where information and knowledge are more widespread.

So what does team of teams mean for virtual teams?

The relevance of the book to project virtual teams is that, similar to the transformation in military tactics made necessary by the need to face an enemy who is fluid, elusive and largely self directing such as was faced in 2003, modern business and project has also had to change. Modern project structures, with teams of personnel distributed around the globe have become increasingly hard to control from a central location, these new teams require distributed leadership and the empowerment of those on the ground to make the day-to-day decisions using information they have to hand.

In the book, the authors describe transforming their command headquarters from one where everyone looked to the commanding officer for instruction and many were reluctant to share information, believing that this information was their source of power, into one where everyone, regardless of rank, had a voice, where everyone shared information. The recognition that such sharing empowered everyone with those closest to the issues empowered to make decisions and take action.

As our modern projects become more complex and increasingly move to the use of virtual teams, I believe the principles of a team of teams set out in this book are where we need our leadership to go. To move from the historic model of a hero project manager controlling their world from behind their desk, to a collaborative project leader, supporting and guiding an empowered global team, a team where everyone is able to make appropriate decisions for the overall benefit of the project using the most current, openly pooled information and where silos and secrets are replaced by openness and sharing.

The book is available from all the usual outlets both online and from bookshops near you.