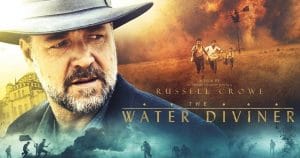 This post considers how the 2015 movie The Water Diviner, directed by and staring Russell Crowe (@RussellCrowe) as Connor, and co staring Olga Kurylenko (@OlyaKurylenko) as Ayshe and Yilmaz Erdogan (@YilmazErdogan) as Major Hasan, with a screenplay written by Andrew Knight and Andrew Anastasios, can be used to demonstrate some of the best aspects of effective cross cultural communication.

The story is set against the backdrop of Turkey shortly after the first world war. It sees the emotional and cultural clash between an Australian father seeking the fate of his sons who were part of ANZAC forces during the failed Gallipoli campaign, meeting with the Turkish citizens and military who experienced the loss of the battle from their side.

From the perspective of cross cultural communication, this conflict based aspect of the story could lead to a tale of complete dysfunction and aggression, with the protagonists continuing the military conflict into the post military relationships. But, through developing characters who embody many of the best characteristics of effective cross cultural communication, the story becomes a wonderful example of how to overcome dispute and conflict, achieving an environment where the parties build a strong and trusting bond.

While, in the early stages of the story, Connor is impatient and anxious to uncover the fate of his sons, maintaining a sense of pressure and urgency in his task, he also develops a remarkable level of empathy in how he builds relationships with the Turkish characters.  It is, of course not surprising that there is a period of tension between the Australian and Turkish characters. They are each dealing with the losses of both life and dignity as they each come to terms with the humanity of their former adversaries.

In similar ways, it is not uncommon for virtual teams, made up of personnel from different cultures, to approach each other with a high level of apprehension. Certainly it is rarely as high a level of tension as it would be in the aftermath of armed conflict, but the parallels are definitely there.  Each party is evaluating the behavior of the other, with the suspicious members of each team looking for perceived slights and evidence to support their own preconceptions. Indeed, in some newly formed virtual teams there is a sense of suspicion from some, who see the approach as a potential threat to their own future employment. While others see their new virtual colleagues as alien and too different to work with.

In telling the story, and particularly the development of the cross cultural communication and relationships, the writers have been relatively true to the general cultural positions of Australia and Turkey.  On Hofstede’s scales Australian scores as having a lower Power Distance, a higher degree of Individuality, a more culturally Masculine society and a lower Uncertainty Avoidance than Turkey.

These differences are demonstrated in a number of aspects in the story; through Connor’s character working very individually in undertaking his quest to discover his sons fate, even acting against his own societal norms. In Connor’s relative disregard for the military authority that tries to hinder some of his search efforts. While the Turkish characters and society are shown as being very family oriented with large, extended families, and as being more hierarchical in the structures of both their civil and military societies. These cultural identities give a good contrast to the background of the story which, whether intentional or not, are useful examples.

Many of these cultural differences contribute well to the telling of the story, and provide some excellent insight into how cross cultural communication can be developed to bridge gaps.  By understanding and recognising these different cultural traits in one another, we can all become better at cross cultural communication.  We can learn to accept that each person will have different cultural programming that conditions how they interact and behave in any situation.  These are inherent traits and while we are all different, we are simply a manifestation of the way we each see the world.  While some of these differences may be confronting to some not familiar with them, they are only a background.  The differences in personalities originating from these cultural differences can be readily understood, and individuals and teams can learn to communicate through them.

Effective cross cultural communication depends firstly on recognising that we are all different.  We each see the world through the lens of our own culture, society, situation and experiences.  Everyone, even those from the same culture and background, will have a slightly different view of things, but generally, in an organisational environment, individuals will have the best interests of the organisation and their team at heart.  Once this basis is recognised, it is a case of building a series of common understandings, developing a way of working and communicating that is acceptable to all, and most of all, being empathetic and accepting of one another such that differences are seen as just that, and not seen as anything more sinister.

Indeed, in many situations these vey differences can be used to the benefit of the overall group, the cultural strengths of some groups will compliment the weaknesses of others to build an overall stronger organisation, the whole genuinely becoming stronger than the sum of the parts.

So, if you have the opportunity to see the film, consider the cultural learnings demonstrated as a further layer to the film as you watch it.