Managing Not For Profit Virtual Teams 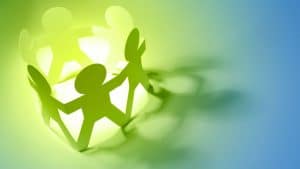 Generally a not for profit will be either a volunteer organisation or a charity, where the income collected is used principally to forward the aims of the organisation.  This leaves little, if any money, to pay for personnel development or the employment of specialists.  These not for profit organisations are also typically staffed by a combination of volunteers and paid personnel, with most of the people drawn to the higher goals of the organisation, often without some of the skills needed to operate in distributed team environments.

Not for profit personnel are typically passionate about the organisation’s cause and will dedicate many hours of their own time to the aims of the organisation, but again their available hours are frequently dictated by the available time outside of their day job.

With limited funding it is often difficult for not for profit organisations to access the tools needed to operate complex virtual teams.  They must spend their resources sparingly on things they need and make do with whatever they are able to find.  This scarcity of funding often limits them to using free communication tools like Skype, rather than higher spec’d video conference facilities.  It also leaves them reliant on learning through experience rather than being able to pay for specialist training.

High Personnel Turnover in Not For Profit Virtual Teams

Coupled with the limited access to tools and training, not for profit organisations often either have a high turnover of volunteers as individual’s lives progress and their circumstances change, limiting their ability to participate, or they have stagnant pools of volunteers who may not be aware of many of the evolving ways they could become a more effective organisation.  This real or potential high turnover or stagnation of personnel means that the costs of training can be high and the returns to the organisation relatively low.

Personnel Attracted To The Cause

Additionally, many personnel in these NFP’s are attracted to the cause, and will often work for free or for little financial reward.  As such, linking the performance of personnel to any form of payment is therefore very difficult, meaning that it is not possible to manage individuals performances, select for skills or offer tailored training, as the personnel may be in roles for which they are less suited but which they are passionate about.

Building An Effective Not For Profit Virtual Team

Faced with the challenges set out above, of a workforce largely made up of volunteers with a passion for the organisation’s cause and either a high turnover or a stagnant pool of personnel, the challenge for not for profit virtual teams is how to make the best of what they have.

I would suggest there are a number of things that such an organisation can put into place that may help:

With a considered approach, a not for profit virtual team should be able to function as effectively as a for profit, they need to stay within their abilities and plan for the future but with proper planning that is completely possible. Additionally, many Not For Profit organisations have one thing many for profit organisations lack, and that is staff passionate about the outcomes and who will go the extra mile to help out their virtual colleagues. This passion and enthusiasm will often help to balance the capabilities of a not for profit against a for profit business.

Please enter your details below to subscribe to our  newsletter.