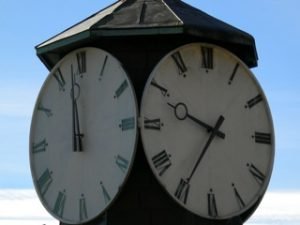 When people think about the impact of time on virtual teams their first and often only thought is to consider time zones and how the difference in time between locations impacts the ability of personnel to interact effectively.

There is however a second, more subtle, though no less critical area in which time affects the operation of a virtual team.  That is temporality or temporal diversity, the way in which each individual, with some external cultural influence, perceives and values time and timeliness.

Those who see time as precious will be recognised for their punctuality at meetings, they will worry about meeting schedules and will work long hours to meet deadlines, these same people will become very conscious of the timeliness of their colleagues and will often be observed checking on the status of work being undertaken by others.  Those who see time as expansive will typically see a schedule more as a set of indicative guidelines, these individuals may be more focused on the quality of the work being undertaken rather than its timeliness, they may appear late to appointments and may not be as concerned about the perception others may have of them in this regard.

When the two forms of temporal diversity described above clash there can be extreme tension and conflict between the parties.  Each side of the divide will see the other as being wrong, often without recognising that it is simply a different way of seeing the world, but the clash can be destructive and cause irreparable damage to relationships and trust in organisations.

One side will feel let down by work not being complete when they believed it should, the other may not understand why there is so much pressure on time in a project where they were working hard to deliver a quality outcome.

This situation has led to the failure of many endeavours, since, once the bonds of trust are broken between offices and individuals they are extremely hard to repair, and the time it will take to make the repairs and get the project back on track will leave the budget in tatters and the project a likely failure.

Temporal symmetry is the condition where individuals have matching or relatively similar perceptions of time and its use, these matched individuals will find it relatively easy to relate to each others views of time and as such will generally be aligned over issues such as schedule and timeliness at calendared events like meetings.

Having a team where groups of individuals exhibit temporal symmetry but where the groups themselves are asynchronous is however also problematic, if, for example, one team places high value on timeliness and the other assigns it a lower value, there will be almost continual tension between the teams unless there is some training or instruction given as to how they should manage time issues between them.

Managing teams with high levels of temporal diversity demands a high degree of involvement from the managers of each group, a far more hands on situation than one where all of the teams are relatively synchronous in their perception of time. The managers need to be regularly checking that everyone is working to the same dates and the same quality outcomes, the managers also need to be ready to intervene to address any issues as soon as they surface since if left unaddressed even the smallest issue can quickly become a major problem.

Ulfire specialises in supporting organisations establish and run high performing virtual teams. We combine extensive practical experience from decades of involvement in virtual teams with current real world academic research into the way members of virtual teams collaborate. Please contact us to discuss ways we can asset your business.